Ok, so I did the unthinkable. I bought my hat pre-made on ebay.

All the forums at the 501st say not to do this, two people I talked to said not to do this, but I was just so intimidated by the fact that I had a hard time finding a pattern so I did it.

And I regretted it.

First off, it's oddly shaped.
Second, the greeblie or disk was not accurate.
Third, it's too tall!
Fourth - it was too big. I measured my head size, and got a hat that was way too big
Fifth - it cost 30 bucks. What a rip off!

Sigh, crap. I just need to make my own hat.

Bridge Crew hats doesn't come up that often in google, but Imperial Officer ones do.

Cyberseams Imperial Officer Uniform Hat had the best tutorial and pattern, so I started there. First I had to print the pattern on Legal sized paper. The trick is to just buy the sheets for 7 cents each at a copy place and print them at home without buying a whole ream of paper. The office couldn't print it for me because it was copyrighted.

And remember that second suit I bought? The one I was going to cut up to alter the other one? Yep, it came in super handy again! I just cut it up some more and now my hat matches my jumpsuit perfectly. I got some plain grey fabric for the lining, something not stretchy. And I got some interfacing (iron-on) and stiff interfacing for the bill.


I found the pattern to have a few typos or errors. So here is what you need to cut:
- two black sides and two gray sides for the tall hat part, called crown
- four black flap pieces (top and bottom), which will make two black flaps. They were the same even though she had two pattern pieces
- one white stabilizer for bill
- two black pieces for bill (top and bottom)
- one black and one grey circular piece for top of hat 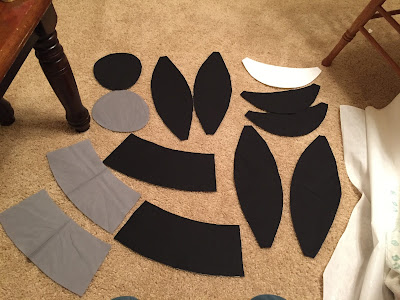 Then attach interfacing. I find that cutting out my pieces first, then ironing it on just till it sticks, then cutting interfacing is best. Then iron it on thoroughly after it is cut. Put an old T-shirt on top so you don't get the interfacing sticking to your iron! 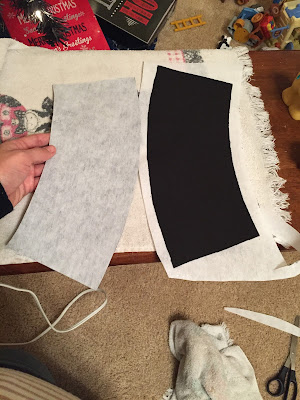 I put interfacing on all black pieces, not grey. Here all all the pieces all interfaced and ready to sew. 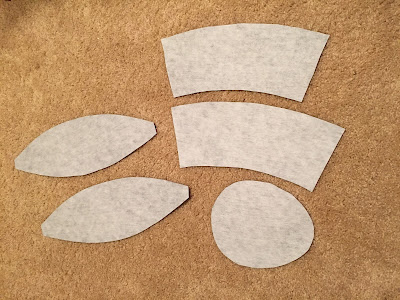 I followed the pattern pretty closely and the directions. Here are few visuals to add to theirs that help it all make sense. I don't know why but you trim the bill, maybe after making the pattern he or she resized it and didn't want to redo the paper pattern but the first thing you do is cut this. I did use their notches in some cases but mostly I did not. 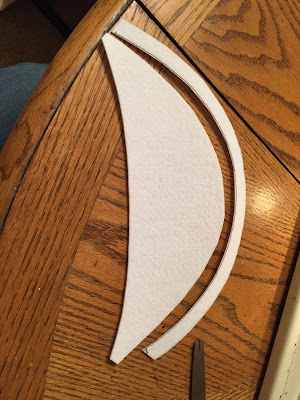 I cheated. I sewed my black pieces together, trimmed them up so the seam wouldn't be bulky, turned it right side out, and then put the white stabilizer in in. Then I sewed the decorative lines. It came out great! I was worried about the extra part showing but the hat turned out fine at the end. I did not trim the white edge off because of her large seam allowances. I read the description on the 501st page for my hat and made sure it fit their requirements on the lines, not hers. 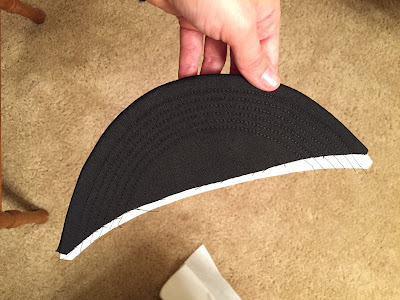 Then you sew your crown pieces together, just the black ones first, then the grey.

Make sure to press your seams flat so the hat lies nicely. I pressed mine open and flat. I was worried about how large the seam allowance was but in the end it all worked fine. Make a note where you center lines are. I put a yellow pin where my center seam was (seam on the sides was my choice) and also put a white pin in the front part of the circular top. That way you always know which is the front and center of  them. 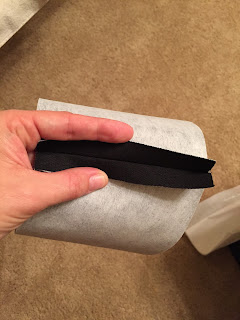 Note: the pattern said to notch the crown. Well, it didn't work. And logically I realized I needed to notch the circular hat part. Did that and the hat fit much better. Note my yellow center and red pins. The rest or side pins were white. Helped line them up easily. A notch is not a slit, so make sure you make mini-triangles and then pin them closed. Worked great. 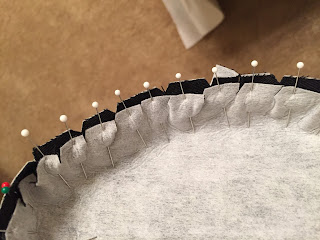 If you look below you can see the white pin that indicates the front of my hat and a center pin is there as well but doesn't show. That way I know where to center my flaps and bill. Doesn't that look like a a promising start? 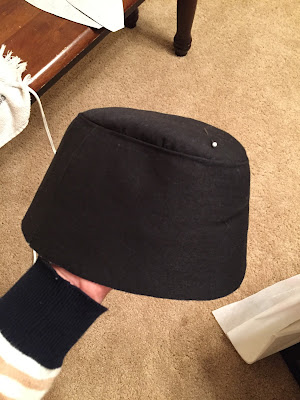 Note: trim the seams as the pattern states, with a layering technique to help reduce bulk. Google it for details but it makes the hat looks so sharp! 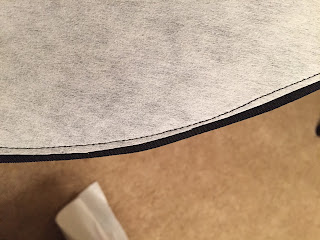 And when putting the flaps on, I found you need to measure or center them first. Unless you put centering pins in your pieces earlier on like me. I sewed my bill on by starting at the center and working out like the pattern mentioned. No puckering at all. I did the same for the flaps. 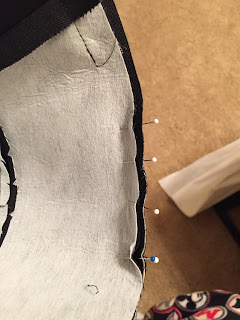 The rest of the pattern seemed straight-forward. Send me a note if you need more details and I will provide them. The whole process took abut 3 hours for me. The cost was about 15 dollars (7 for greeblie) I purchased items at Jo Ann's with coupons to boot.

Now, isn't that much nicer? Compare that neat, trim little black hat on the right with the oddly-shaped hat on the left. 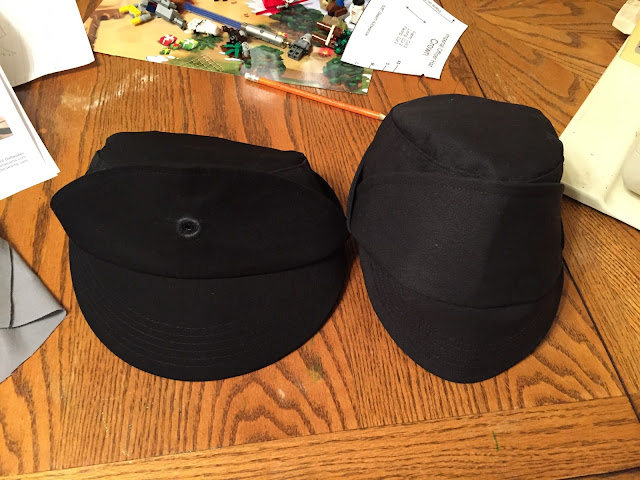 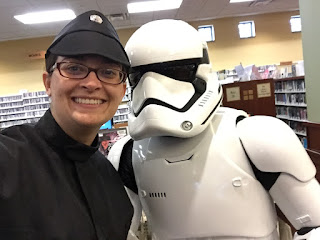 The greeblie or insignia disk I purchased off of a 501st member - Ken at elvistrooper.com
It was much better and way more accurate then the ones that came with my ebay disaster hat. And inexpensive.
I plan to attach the disk to a thin rare-earth magnet and then it can easily be removed. Or use super glue. Whatever strikes my fancy.