The bridge crew has a variety of pockets that have to be sewn on. It already the two standard pockets on the hip (like normal) so you don't have to worry about those.

I found no downloadable pattern anywhere but did find a good visual aid on the jollyrogers forum as already mentioned. That became my basis.

Not its time to cut up the second suit I bought. 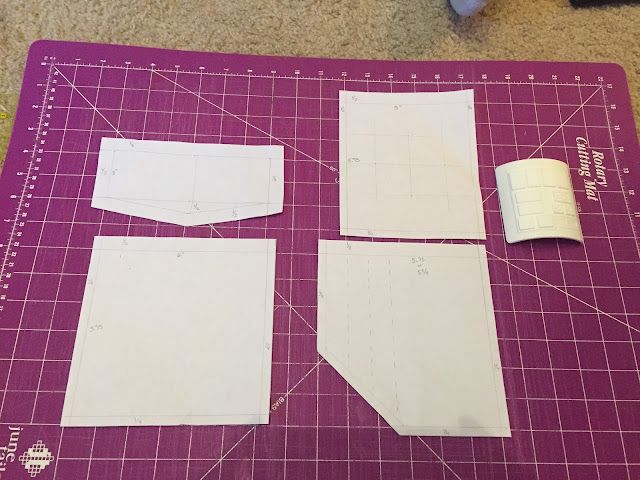 Here are the pocket patterns I created. Based off the 501st costume resource page for this one. You can see my comm pad on the right but ignore that for now. I will cover each pocket separately. 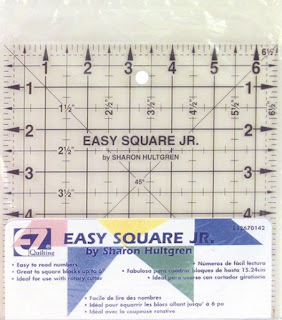 An indispensable tool is a clear quilter's notion called a square grid or ruler. I love mine! I got a small one at JoAnn's for $5. Can't beat that.

Supply List:
Plain white scratch paper
Grid Ruler
Pencil
Chalk pen for marking fabric
Scissors, two if you have ones for cutting paper and ones for cutting fabric
Sewing Machine with black thread
Comm Pad already purchased
Your two suits, one for wearing and the other for cutting up
Black velcro with sticky backing
Several good movies to watch: I was watching Sherlock on NetFlix.
Chocolate for snacking 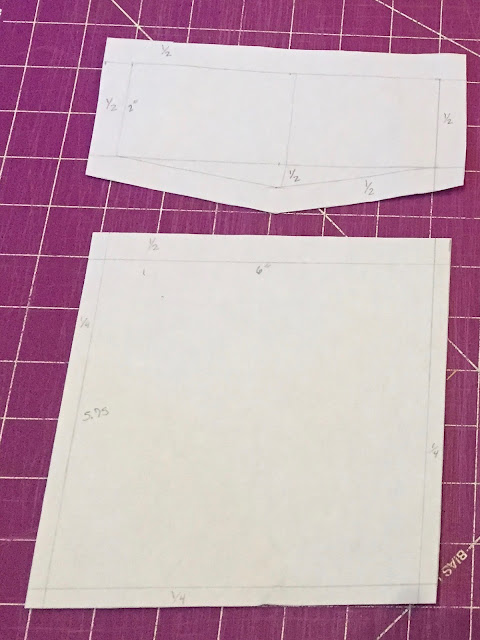 This set makes the pockets on your legs and right arm. The measurements for the flap are: 6 inches wide by 2.5 inches tall at center. Then sides are 2 inches with bottom part being a chevron or triangle. I then added a 1/2 or 0.5 inch border. You will be double-folding and stitching the border to make a nice edge to the pocket.

The pockets dimensions are 6 inches wide by 5.75 tall with a 0.25 inch border on three sides, and a 0.5 inch border on the top. The sides and bottom you will only fold in 0.25 inch and press. This is because those sides will be sewn to your pants and won't be open. The open side you want to fold 0.25, press with iron, and then fold in 0.25 again so no raw fabric edges are exposed. 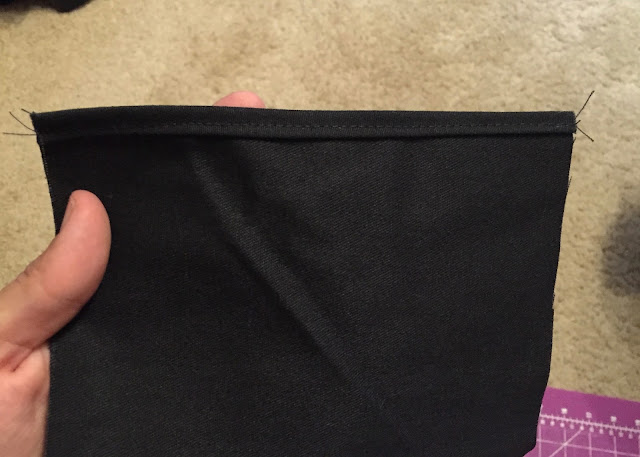 Once you have pressed them, and you can just press them with your fingers or handle of your scissors, or use an iron. Sew them along the inside edge as shown. That will be the top edge to your pockets. Whenever done sewing, make sure to clip your threads. I will assume you know this from here on out. 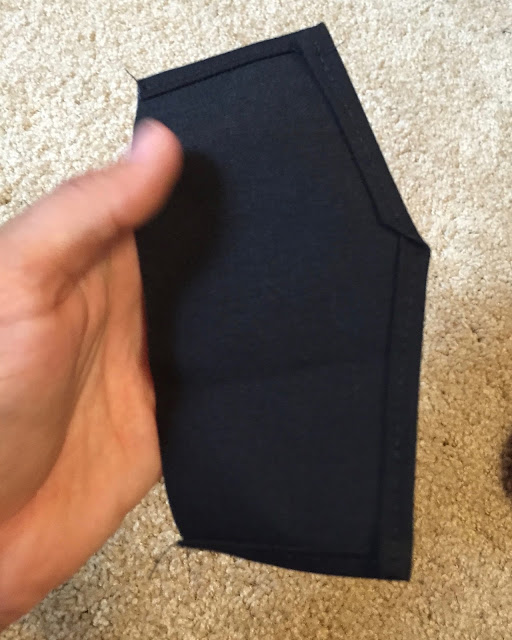 For the flap, I sewed first along the sides. Then I folded and sewed the right half of bottom from outside in. (due to triangle shape) and repeated for other half of bottom. 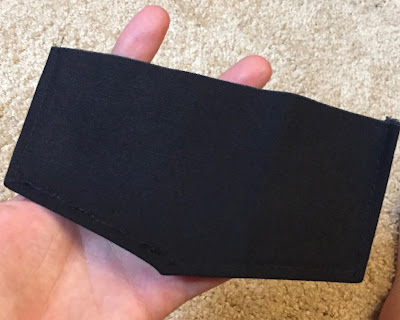 It looked wonky from the back but the front side looked nice and pointed. (or chevron style) 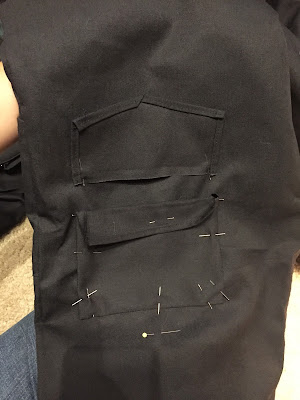 Measure the center fold of your sleeve. I marked mine with the lower white headed pin. And pin your pocket on where you want it to be with the center of the pocket along the center top fold of your sleeve. After pinning see if you like how it looks so you don't have to redo it. Then pin your flap so it lines up. I sewed the flap on first. I placed it right above having 0.25 inch over lapping my pocket. I folded down the top of the pocket and then I stitched the bottom of flap in place with 0.25 seam allowance. I cheated. I folded the bottom edge over 0.25 inches then stitched right along that line and didn't pay attention to what the seam meter on my machine was saying. 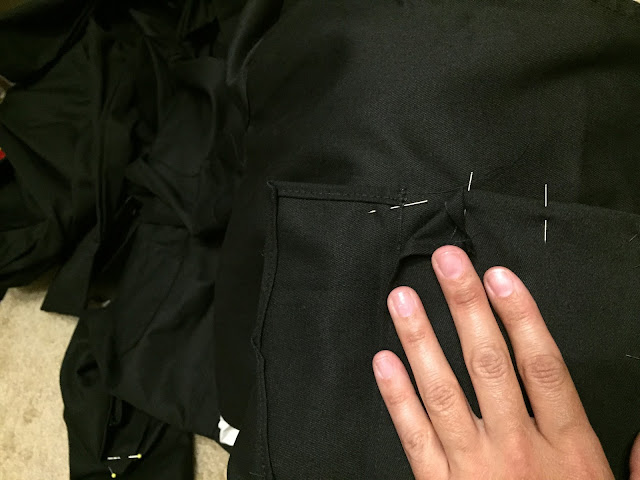 Unfold your pocket, note how my pocket goes right up to the flap, pin and sew along right, bottom and top of pocket. Two small squares of sticky velcro were attached to the flap and pocket to hold the flap down. And they turned out rather nice. I suggest you pin both on and see how it looks. If you want put the flap up higher with maybe a 0.25 gap between it and the pocket. 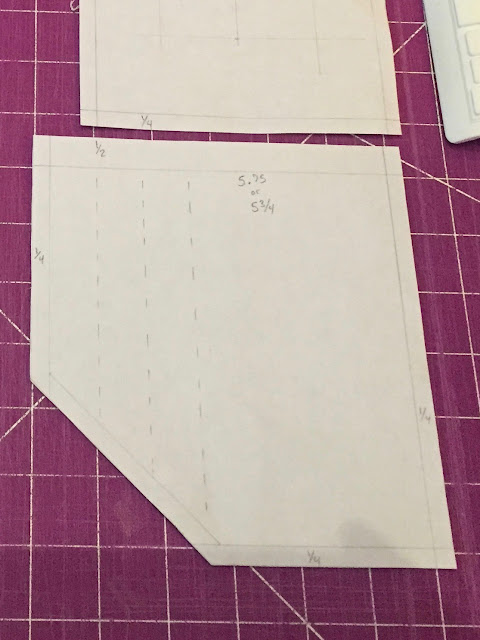 This is the Data Cylinder pocket. It is 5.75 inches wide and 6 inches tall. Once I measured out my initial rectangle, I then measured 2.5 inches from lower left corner along the left side and bottom. By connecting these you make the bevel edge. (which means to cut off corner edge in layman's terms)

I then measured and made dotted lines for the cylinder dividers. They are 0.75 inches wide starting from the left side. Like the other one it has a 0.25 inch border on all sides but the top, which has 0.5 inches for the double fold. 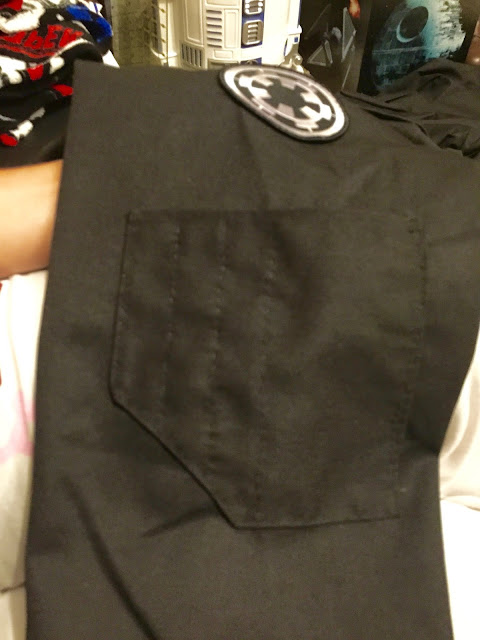 I double-folded the top and stitched it first, just like above. I then folded the 0.25 or 1/4 inch along the sides, pressed, the bottom, pressed, and lastly the corner. I then pinned it before stitching along the right, bottom, corner, and left. Make sure to center your patch on the sleeve. You leave the top open.  Lastly, I measured the 0.75 the cylinder pouches needed to be and sewed them. You can do this two ways (or more maybe): mark them with fading pen or sewing chalk pen. Or, my cheater way, measure 0.75 on the pocket and put pins right in the line. Remove them as you sew. Note: my lazy way may result in slightly crooked seams. My other idea was to put tape there and follow along the edge of the tape, but my kids had used all my tape to make paper guns. These last lines must be hand sewed since it most likely won't fit in your machine without sewing your sleeve closed. 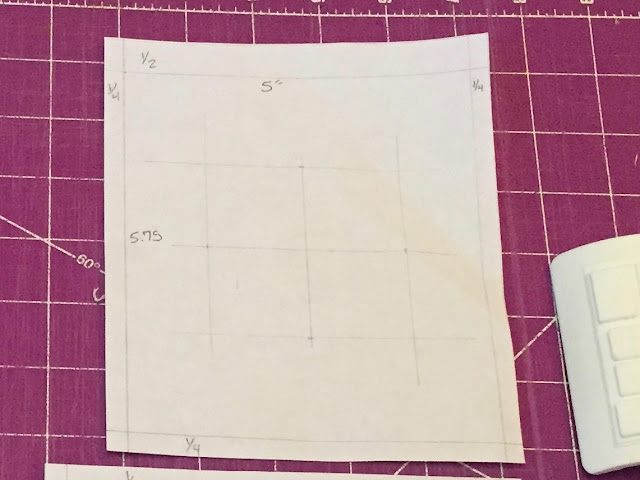 Last is the window pocket. It is 5 inches wide by 5.75 tall. I found the center of this pocket by making horizontal and vertical lines along the center of each side, where they cross is the dead center. And used these to make a 2.25 inch square. I cut this small square out of the paper pattern. Again, it has a 0.25 inch border on all sides but the top, which has 0.5 inches for the double fold. 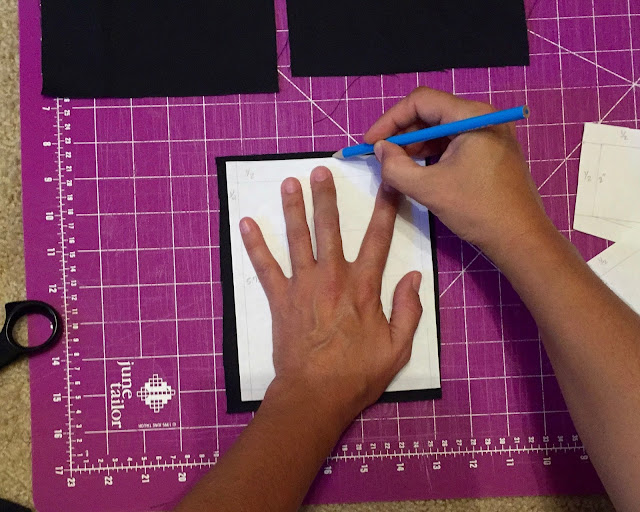 Trace and cut on the back side of your cloth. I used the second suit I had purchased so the pockets would match my base suit exactly. I was using a quilters pen that fades over time in the picture. However, the black cloth made it hard to see the blue lines. I switched to a chalk pencil and that worked great. I also realized that I could cut out the little window in the paper pattern and trace it all at the same time. Second time's the charm. 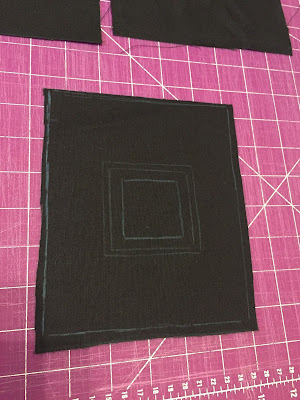 After I traced the window square and the borders, I added two more inside windows by free hand just to show you how to fold. I didn't measure because I was lazy.
But if you did measure, they should be 0.25 apart. I also did not trim the edges yet, notice the outside blue line is not all trimmed up yet. 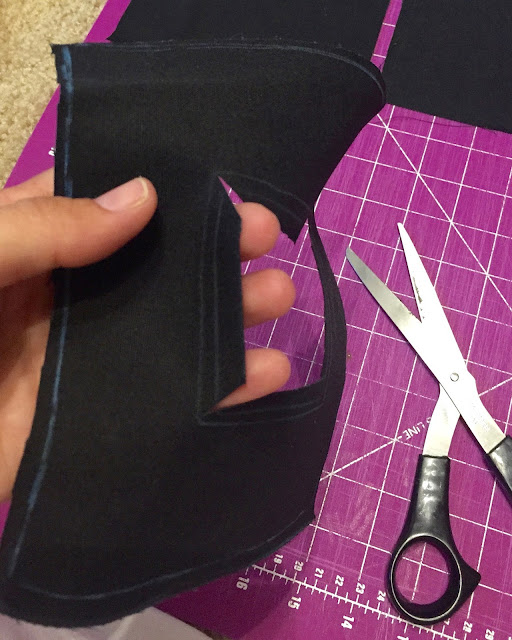 You are going to cut from the inside corner of the smallest window square to the largest. If you haven't done so, trim the outside edges as well. 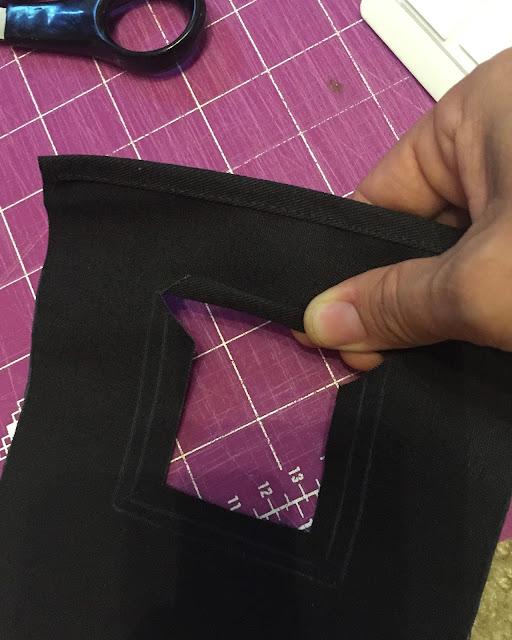 You are then going to turn or fold each edge of the window 0.25 inches. Then do it again. This will double-fold the raw edge inside so no threads can fray. Pin and machine sew. You will also do this to the top. If you notice I already did this in the picture. It makes a nice edge with a seam to have at the top of your pocket.

For extra protection again fraying threads I put a dab of Fray Check Sealant on the corners of the window. You can find this at your local fabric store or JoAnn's. 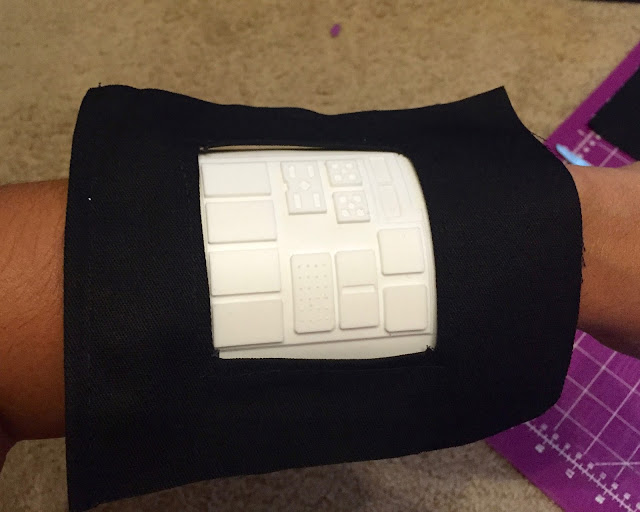 Sew all your window edges and it should end up with a neat opening for you comm pad.  The last step is to fold and press all edges 0.25 inches in. 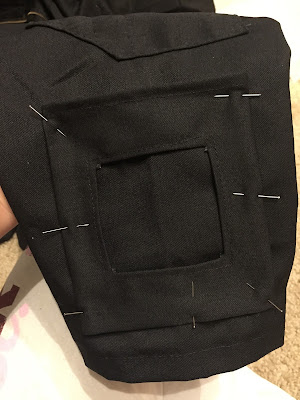 Pin your pockets on the right arm of your suit and make sure it lines up with your top pocket. My alignment worked fine but in retrospect I would pin both pockets on before sewing them to make sure they were lined up. Otherwise you might end up removing one pocket to re-align it. Remember you are not sewing the top. 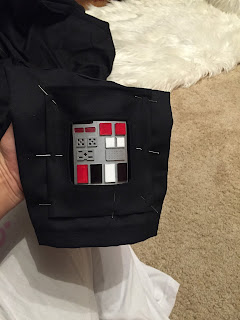 Do a sanity check: put your com pad in and see how it looks. Try it on your arm and if you like it, then proceed. 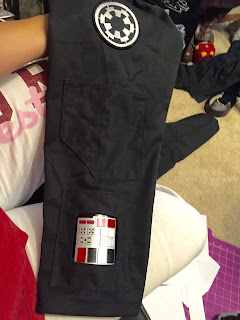 Sew along left, bottom, and right sides. Don't sew along the top or they won't be a pocket!

And you are done with the suit... yay!

The final chapter... StarCraft: Legacy of the Void

I became hooked on StarCraft in college. I loved the alien races, the storyline and expansion packs. Guess how excited I was to find out (three years ago) that they released another series in this genre. I immediately bought it, played it multiple times, and have cherished the experience.

Now with games changing to online environments that focus on a main character (MOBA) or alliances, this might be my last chance to relive the strategy-styled games. Gosh, how I miss the thrill only Age of Empires or Warcraft II could give, building a base, amassing troops, and crushing your enemy. Gathering resources, upgrades, research - all added to the challenge. One game I miss most of all: Galactic Battle Grounds. Star Wars meets Age of Empires. I still have the disk and an old Mac to play it on. Too bad no new games have come close to taking their place in my gaming heart.

I admit to being sucked into their online world a little bit. I have really enjoyed the short stories based on the games plot. Some of them are very well written. 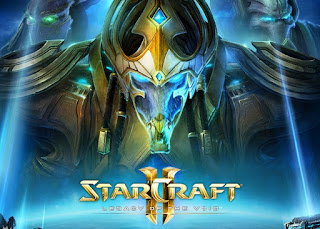 StarCraft will probably evolve into something else. For now, I can pre-order the last chapter, play the three pre-games while I wait for it to release. And relive my glory years for the last time. Nothing will ever be the same.