So, to join the 501st Legion prior to having my Storm Trooper costume, I need another costume. A cheaper, easier one too. All my money has been sucked into a trooper outfit. (see previous post) It was suggested I be an Imperial Bridge Crew member. The outfit is cheaper, easy to put together and when I don't feel like wearing a bucket (slang for trooper helmet) I can be an inconspicuous extra who can help other bucket-wearing people walk around and keep crowds at bay. 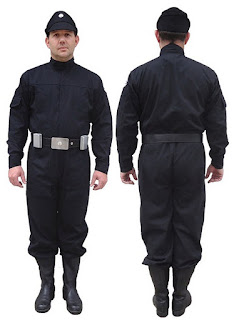 I was first directed to the 501st costume gallery for what it is and requirements. (image above links there) That was a bit daunting because they list really specific things! Like a pocket has to be 6 in by 5.75 in exactly. I admit I panicked. I don't sew that well, and don't want to have to redo everything if I don't pass the inspection.  What a relief it was to find that there is a lot of leeway and you only send in 4 photos to be accepted. No measuring or major scrutinizing. Whew! My pockets can be 5.8 by 5.6 and no one will know!

My first step was a suit. I heard rumblings that you could make one but that you could also just buy them from a flight suit company or a mechanic outlet. What a find! Of course you have to buy two: one to keep and alter, the other to cut up for the extra pockets and such. That adds up but then you aren't driving to every fabric store in the area to find matching fabric. And since I live in rural Wisconsin, there is only one fabric store and it is 20 minutes away anyway. If I drove to two stores, the gas alone would pay for the second suit. And they ship it to your door. I'm all about the lazy!

1. Bookmark costume reference page on 501st - you will visit it lots
2. Visit forums to get ideas and links to vendors
3. Order supplies off internet
4. Jump up and down when they arrive
5. Commandeer daughter's sewing kit because yours is scattered around the house

I began with the flight suit. First I visited the 501st forums and found a few good links off the Jolly Rogers Academy page. Each evil group has their own cool name and forums for costuming. Then each garrison has their own forums, and the 501st has its own big forum. So lots of places to find help. They recommended using a jumpsuit that could also be used for a Tie Fighter Pilot costume. And I have been duly informed once I get started I might want several costumes. And I thought, Why Not? Who wouldn't want to be a Tie Fighter Pilot?

I bought my suits from here and the visual images from the Jolly Rogers Flight Suit page are a lifesaver!

*Note: I bought the twill one. Its a heavier cloth for colder weather (I live in Wisconsin you know) and I think I might buy the cotton one for summer months when I do parades.

I also purchased Imperial Empire Cog Patch on Amazon. The legion is very specific. It has to be a certain size and color. I also found some on Etsy or Ebay. Search for Star Wars Imperial Patch and you will find what you want. I bought three in silver. In case I needed an extra. 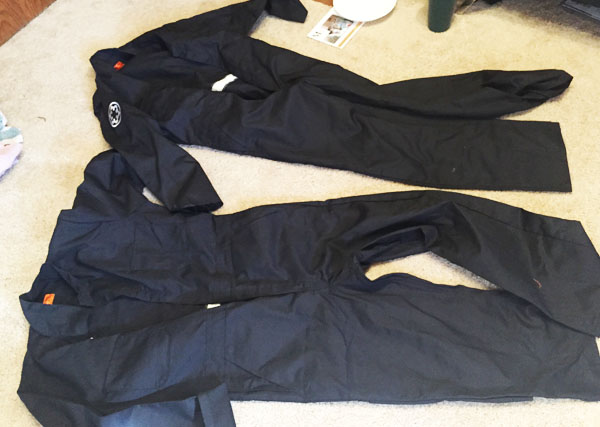 My two suits. I took this after I sewed on the patch. I was prompted to do a build thread after I had already started. 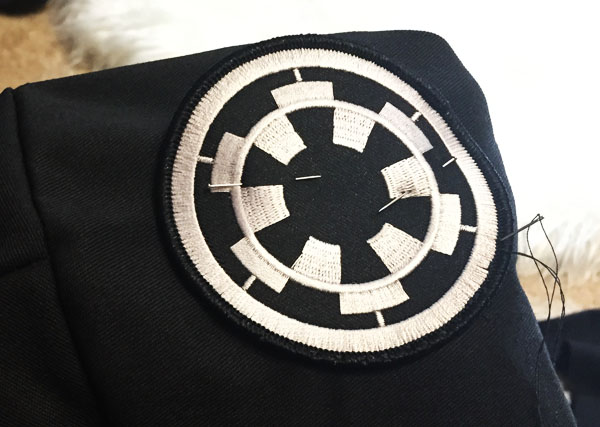 I measured one inch from the shoulder seam, and centered it along the line (where it was folded in half) and pinned it. I personally chose to hand sew it on. I used a technique called "stitch in the ditch." Touch the link and look at the pictures part way down. You aren't using a machine but the concept is the same. The goal is to hide your stitches. I placed my stitches exactly in the line between the white border and the black border. That way the stitches don't show. Took some extra time but it looks nice! I can then remove the patch and reposition it at any time. I sewed the other patch on in the same manner.

And now the collar:

The collar has to be 1.5 in  tall with a chevron style velcro flap for closing it. The flap has to go left over right. You need a measuring tape and marking pencil. A regular pencil might not wash out, this one is a special one for quilting. I love it. Some fade and some wash out. Either way - they are quite handy. 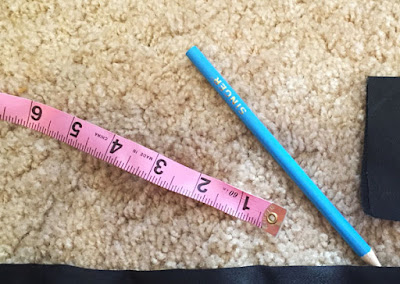 To avoid ripping off the collar and resewing it back on, I stole a technique from my hubby who was building an X-wing flight suite. You fold the collar on the inside and sew it. Measure and pin and make sure its the right height. Again, I hand sewed mine to make it lay just the way I wanted. 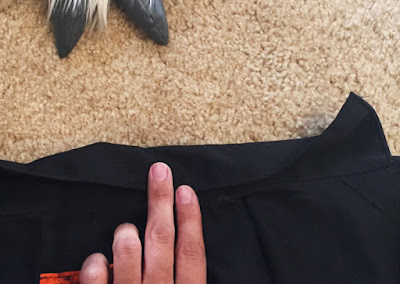 Next I cut off a piece of material from jumpsuit #2 that was 2 inches wide by 9 inches long. (well first I made one that was too short and had to do it again).  Remember that 1.5 inches with 1/4 inch seam on each side is 2 inches wide. Fold it in half. The top will be a fold and the bottom will be open. (Otherwise you are going to end up with an upside down one and have to redo it). 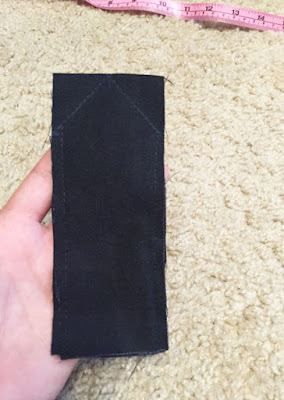 I made a mark on the top for the middle, measured down one inch on each side and make a mark. Then I drew a line to connect them. That made the chevron (or triangle) top. I then sewed 1/4 seam up the side, along the triangle top, and 1/4 inch down the opposite side using my machine. Trim off the extra material along the top cutting 1/4 inch from the seams. Turn it inside out, use your pencil to push out the tip and press with iron or flatten seams with scissor's handle on hard surface. 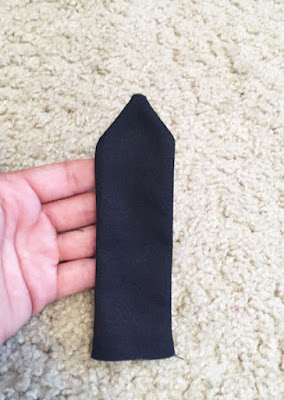 Ta da! Chevron style flap. I then folded the bottom ends in so the ragged edges of the fabric won't show. I finger pressed them to make a good crease and prepared to sew it onto my collar. 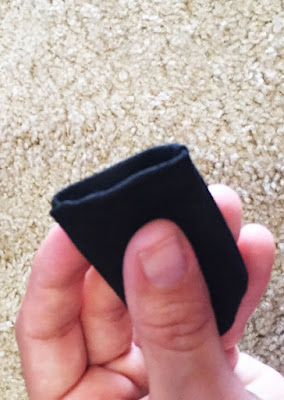 Just two tricks I have learned over the years. Sometimes when sewing over thick fabrics, you can have a hard time pushing the needle in or it jabs you in the finger. I use a small plastic thing (whatever I can find) to push it in and save my finger. A thimble will work the same but often my needle slips in the holes and still stabs me so I switched. 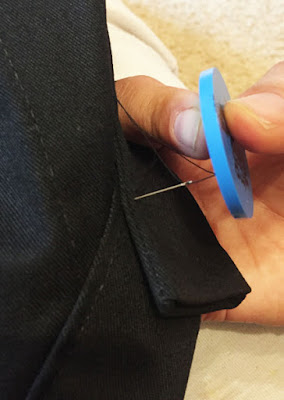 A universal tool that is so handy when sewing is needle-nose pliers. They can grasp a needle to is too hard to pull through fabric and easily pull it out. A must have for any sewer. Sewing stores also carry little rubber circles that can be used to grab needles. Note: putting lotion on your hands compounds the problem. Avoid that when starting to sew.

Notice that I am sewing the flap on the left side of the collar. The suit is upside down as I work on it. 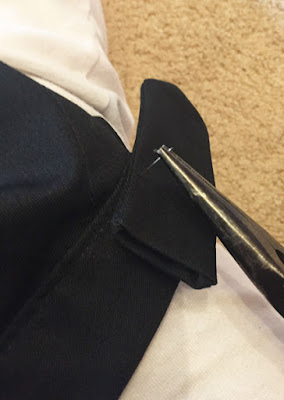 And now the collar is almost done. I plan to use velcro to adhere the collar. The sticky velcro works fine for me. I don't plan to sew it on. But either way (stick velcro or regular), try the suit on and put the velcro in place while you are wearing it for optimal fit.

*Note: if you choose to sew on sticky velcro just to make sure it won't fall off, be aware that it will cause a sticky needle. A simple solution is to keep a cotton ball with rubbing alcohol nearby to clean the needle. 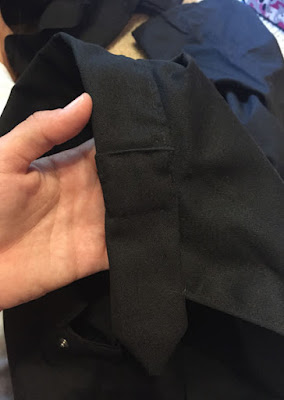 And we are off to a great start!