A big decision to make... or not. Joining the 501st Legion

After a ten year hiatus from dressing up and making costumes, I was urged to rediscover this love by my hubby. He has been in costume mode for months now. It started with preparing for Chicago's C2E2 but soon morphed into all out making-every-costume-he-has-ever-wanted mode. It is a bit scary, he is not always mentally present, and it is expensive. But since he really works hard and loves it, (and we aren't broke) what can a girl do?

He is making a Star Lord helmet, a Plo Koon Jedi costume (I sewed the cloak), an X-wing Pilot costume, A Bossk Bounty Hunter costume, maybe a Greedo one, and a wolverine one... you get the idea.

At any rate he prompted me to join him and make a costume, especially a Star Wars one for Halloween. He suggested many good female characters. Whereas I promptly informed him I just wasn't that excited to dress up as a Jedi. This started a revelation on his part that I really prefer the Galactic Empire over the Rebellion. Needless to say there won't be any wars or desertions over opposing beliefs, but I was a little surprised that he didn't notice it at all.

Evidence is my lego Storm Trooper and Red Imperial Guard keychains, my Lego ATAT walker sets (yes, sets) my Storm Trooper T-shirts and the fact that I love The Empire Strikes back.  I also admitted I have always, and I do mean always, wanted to dress up as a Storm Trooper and join the 501st Legion. I looked at buying a trooper costume when we were first married but the $700 price tag was a bit hard to swallow for two struggling students.

This was in April and he almost went out and bought me a $2,000 trooper costume with his bonus as a surprise. When I got a call from my visa about a 1,700 dollar possible fraudulent charge from a european costume shop I almost went ballistic. I had a nice chat with him, realized the purchase was for me with good intentions and also realized my ADHD, impulsive hubby was going to get me a costume on the fly if I didn't go out and pick one. Soon.

So I did what Vader said I should do - well that is the 501st Vader named Dave I met at C2E2. Go the forums, sign up for an account, and talk to other nerds about getting my own storm trooper armor. I am so stoked!

They suggested an upcoming company called Anovos Productions (which is making better armor than the others) and I even got in early and got a discount. $650 bucks and I am on their wait list for orders. That's a lot better than $1700.

My sister called and asked what I was doing. I had to admit I was costume shopping for a TK. (Slang for the basic storm trooper). I sent her this so she could have a laugh. Which she did. Thank goodness she loves me as I am. 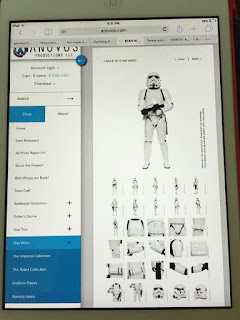 All the good costume makers had a wait list apparently. Mine should ship sometime around Christmas, but could be later. Till then I got in contact with my local Wisconsin Garrison and they suggested an easier costume to get me in the Legion sooner. I plan to start that costume soon. And my dream of joining the 501st Legion might come true!